Fires and stampedes are common at temples and during religious occasions, often because of poor security arrangements and lax safety standards.

At least 102 people were killed and 280 injured when a major fire broke out in the Puttingal Devi Temple complex at nearby Paravoor early on Sunday when sparks emanating from a fireworks display ignited a store room filled with crackers and pyrotechnic material.

The figures were confirmed by Kerala Chief Minister Oomen Chandy. Those injured in the tragedy have been rushed to Trivandrum Medical College.

As the temple festival was on, fireworks display had commenced at the temple precincts since midnight and hundreds of people had gathered to watch the show.

Thousands of people had gathered at the temple precincts to witness the fireworks display which were on since midnight when the fire broke out.

The whole area plunged into darkness as the power supply went off and people ran helter skelter, eyewitnesses said. 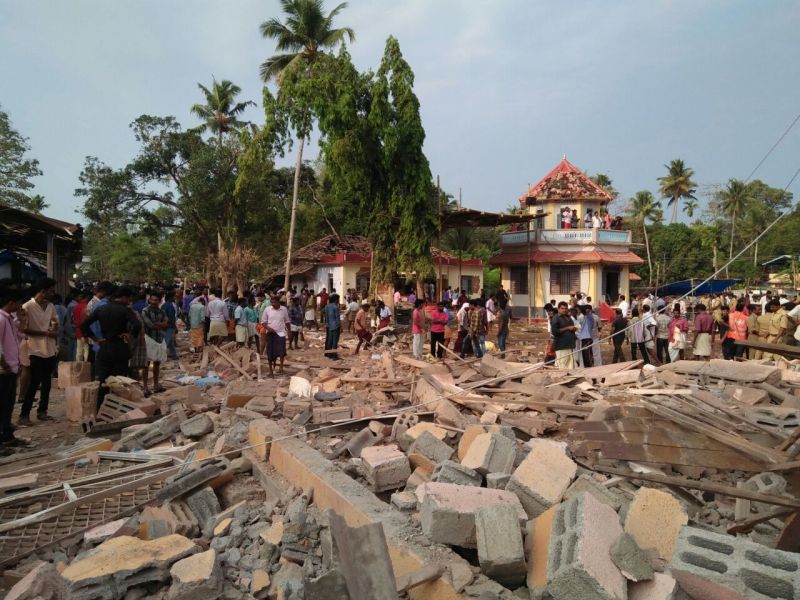 People gather near the mishap site in Kerala’s kollam district. (Photo: By Arrangement)

Kerala Home Minister Ramesh Chennithala has ordered a judicial probe into the incident.

Chandy, who was on an election tour, has cancelled all his programmes to rush to the accident site.

Asked about the death toll, the Chief Minister said the number would go up as reports are pouring in from different hospitals, where the injured have been admitted.

The government would extend treatment facilities to the injured persons in the hospitals preferred by their relatives, he said.

Prime Minister Narendra Modi took to Twitter to offer his condolences to the deceased and their families.

Modi also said that he will be reaching Kerala soon to take stock of the situation arising due to the fire tragedy in Kollam.

He also announced Rs two lakh each as compensation to the next of the kin of the dead in the temple mishap and Rs 50,000 to those who are injured.

A case has been registered against temple authorities and explosive licenses in the temple mishap.

Fires and stampedes are common at temples and during religious occasions, often because of poor security arrangements and lax safety standards.