You are here: Home » Featured » Monsoon likely to reach Telangana in 10 days

The Accuweather service has predicted rain for Hyderabad on June 18.

The southwest monsoon, which set over Kerala on Wednesday, is expected to touch southern Andhra Pradesh —  Rayalaseema and south coastal AP — in the next 48 hours.

Director of Indian Meteorological Department, Hyderabad, Y.K. Reddy, said, “Presently there is no date for the monsoon’s arrival in Telangana. The conditions are favourable and the monsoon will cover south AP in the next 48 hours. It is likely to take a week to arrive in Telangana. IMD will give an exact date four-five days before the onset in TS.”

The 14 stations that have been monitoring rainfall for declaring the onset of monsoon over Kerala had reported widespread rains in the last 48 hours with more than 60 per cent of stations reporting rainfall on June 7 and 8. 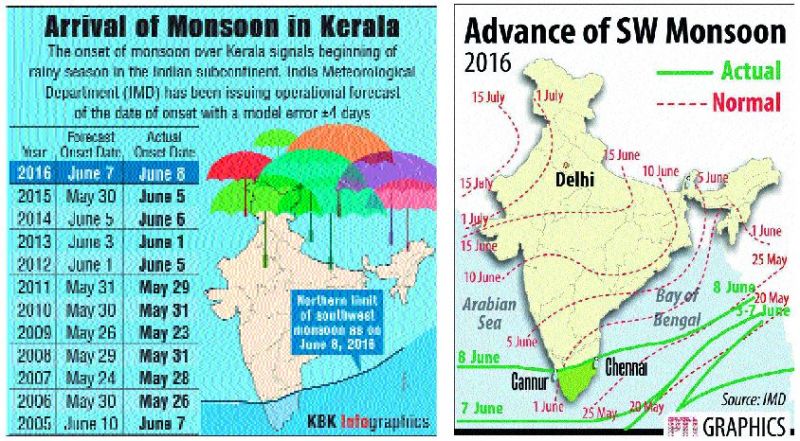 Another condition to declare the onset of monsoon — westerly/west-southwesterly winds at 30-40 km per hour — was observed up to 4.5 km over the south Arabian Sea. Conditions for declaring the monsoon were fulfilled for the first time on Wednesday since the IMD started monitoring on May 10.

In the next 48 hours conditions are favourable for the monsoon to advance into south Andhra Pradesh.The Accuweather service has predicted rain for Hyderabad on June 18. The forecast till then is mostly of cloudy skies and thunderstorms.