You are here: Home » Cities » Bangalore » Will be the last person to curb Kohli’s aggression: Kumble

For members of Team India, the tour will be on a level playing field and every player will get an opportunity to prove his worth.

Bengaluru: Indian cricket team’s newly elected head coach Anil Kumble has sent out a strong signal to the Caribbean that Virat Kohli and his side will adopt an aggressive approach to the four match Test series, the first on July 21.

Kohli has sometimes been warned for his aggressive nature on the pitch but Kumble, who also was quite hostile in his heydays, believes this approach is paramount for the game.

“I love his aggression. I was also no different as I was very aggressive. But we were probably very different in terms of how we came across in the field. But you don’t want to curb aggression. I will be the last person to curb someone’s natural instincts,” Kumble told reporters during the pre-departure press conference, here on Monday. 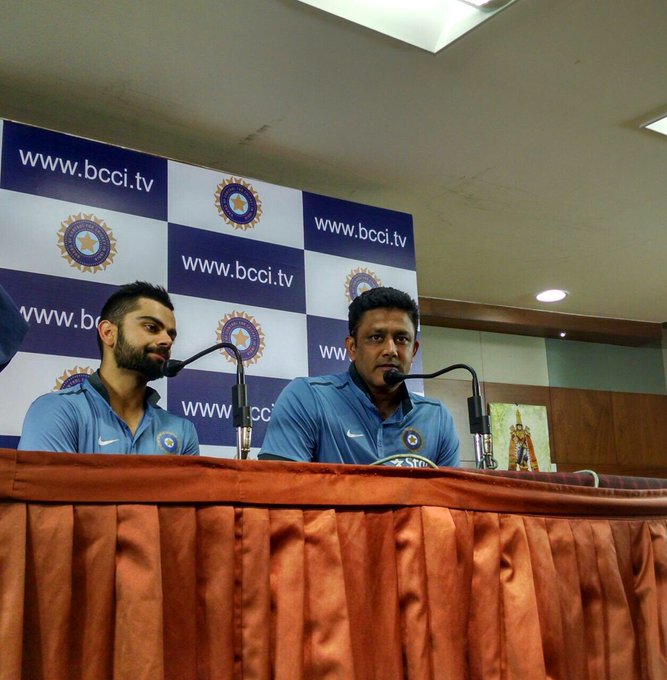 Kumble, However, he also had a note of caution for all the aggressive players, including Kohli.

“But we all know how important it is to be ambassadors of India and part of the Indian cricket team. That everybody understands. We will ensure there is a thin line and I hope everybody knows that. I won’t certainly curb anyone’s natural instincts,” Kumble explained.

India will tour the Caribbean starting July 6, for four Tests and two practice matches. The Tests will be played in Antigua and Barbuda, Jamaica, St Lucia and Trinidad and Tobago. The two-day practice matches will begin from July 9 followed by a three-day warm-up match from July 14 at the same venue.

For members of Team India, the tour will be on a level playing field and every player will get an opportunity to prove his worth.

“Instead of looking at opposition, we’d like to look at ourselves. We’ll give everybody an opportunity and figure out ideal combination,” Kumble added.

“You don’t go into any match looking for anything less than a win from any situation. That’s the positivity we will go with,” he said.

Quizzed on the expectations from the upcoming tour, India’s highest wicket-taker said the idea would be to win.

“As a coach, you want the team to win and prepare them to the best of their ability to ensure that all areas are covered. Skill-wise as well as strategy wise so that they are able to assess any situation and find a solution on their own. Good part is that we are playing a lot of Test cricket and we will be able to assess the shortcomings if any and try to plug that. We will be playing 17 Tests, starting with West Indies and then New Zealand, England and Australia at home.

“The goal is to remain consistent and win as many matches as you don’t go into a match thinking that you cannot win it,” he said.

Skipper Kohli also pointed out that the brand of Test cricket India will play on Caribbean shores will be the same style the team will implement in the coming years.

“We want to play good cricket. It’s a format we will play a lot in coming days. It’ll be a pointer of how we’ll play Tests in future,” Kohli said.

Team India were in for a surprise when coach Kumble brought a refreshing change in preparations as members had a unique team bonding session on Sunday with acclaimed actor-musician Vasundhara Das’ group ‘Drumjam’.

“We had a surprise from Anil bhai. We thought we were in for a serious session, but he set us some fun activities. It helped camaraderie,” the 27-year-old asserted.

Indian fans were in doubt after a video posted by BCCI showed Kohli fine tuning his wicketkeeping skills that raised many questions if he would don gloves during the tour. However, there won’t be any situation like this and specialist keeper Wriddhiman Saha looks to be the man for the job.

Saha is the specialist ‘keeper, his batting has improved. We’ll bank on him. He is a quality ‘keeper, he will take the half chances,” Kohli said.

Back in the mix after a long hiatus from Test cricket, Indian pacer Mohammed Shami will be a vital cog in the Indian success wheel. “His lines and lengths are perfect for Tests. We’re working on his mental strength. He’s eager to come back and prove himself,” Kohli concluded.